Whaling parties, tin and coal miners and pastoralists were among those who lived and worked on the Freycinet Peninsula since the early years of European settlement. Old mine shafts, abandoned farmers’ huts and the remains of whalers’ camps today form part of the rich cultural heritage of the park.The majestic beauty of Freycinet’s granite mountains and white, sandy beaches have also long been admired by naturalists, artists and writers. The area was reserved as a national park in 1916, making it (along with Mt Field) the oldest national park in Tasmania.

The favourite picnic ground of the residents of Swansea, who for many years have enjoyed its numerous advantages with never-tiring delight. Boating, bushwalking, fishing and artistic pursuits were listed as some of the attractions of the area. Early visitors to Coles Bay came by boat or steamer from Swansea.

On navigating the east coast of Tasmania in 1642, Abel Tasman named Schouten Island after a member of the Council of the Dutch East India Company. The adjacent peninsula was initially thought to consist of a chain of islands, but this myth was dispelled during the visit of Nicholas Baudin, the French explorer, in 1802-03.

High granitic mountains whose summits are almost completely barren, form the whole eastern coast of this part of Van Diemen’s Land. They rise sheer from the base. The country which adjoins them is extremely low and cannot be seen unless viewed from only a little distance at sea. It is to this strange formation that we must doubtless attribute the errors of the navigators who had preceded us into these waters and who had mistaken these high mountains for as many separate islands.

The brothers Freycinet were senior officers on Baudin’s expedition, although it is unclear which one the peninsula was named after.

Sealing parties had visited the offshore rocks and islands of Great Oyster Bay since the early 1800s. The American, Captain Richard Hazard of the Thalia, was reported as whaling in the area in 1824. Several features of the peninsula were named after him.

With the expansion of European settlement along Tasmania’s east coast in the 1820s, the whaling potential of the area was soon realised by colonists. Shore parties were established in sheltered bays during the winter months. At this time the Southern Right Whale (Balaena australis) was passing Tasmania’s coastline on its annual migratory trek north from Antarctica.

There is no employment more hazardous; more laborious; more disgusting than whaling. (Leigh, 1840)

Fatal clashes between the whalers and local Aborigines were occasionally reported in the newspapers.

George Meredith, one of the first settlers at Swansea, established a whale ‘fishery’ at Parsons Cove in 1824. It became known as ‘The Fisheries’. The sparkling waters and white sands of Wineglass Bay and Schouten Island soon became polluted with blood and putrid whale blubber as stations were established in those localities. Whale oil was principally exported to Britain where it was used for lighting and as an industrial lubricant. The whale-bone or ‘baleen’ became the mainstay of the fashion industry, being used to make skirt hoops and corsets. By the 1840s shore-based whaling was in decline. Whale stocks had been severely reduced due to years of ruthless exploitation. Pelagic (deep-sea) whaling, with the sperm whale as the main quarry, then dominated the industry until the 1880s.

Sheep and cattle grazing was being carried out on parts of the Freycinet Peninsula as early as the 1850s. In 1859 Francis Cotton reported that a comfortable stone hut and several cultivated paddocks were being occupied by Mr Leggs. The old hut, stone fish traps and a boat slip can still be seen today. Farming leases were also taken out on Schouten Island until the 1960s. Huts at Moreys Beach, an old sheep dip and abandoned farming machinery are testament to the island’s pastoral history. The stripping of wattle bark for use in the leather industry and lime-burning were other activities carried out by early settlers on the peninsula. Coles Bay is said to be named after Silas Cole, an early settler who burned shells from the large Aboriginal middens on Richardsons Beach to make lime.

The sealer Joseph Stacey discovered coal after being washed ashore on Schouten Island in 1809. The deposits were not commercially exploited though until the 1840s when the Garland brothers began mining operations. They constructed a tramway and jetty, but the venture proved unprofitable.

The Government then re-acquired the island and leased it to private concerns. The Australasian Smelting Company, formed in 1848, continued the work started by the Garlands. Edward Crockett was appointed as mine manager and over 60 convicts were hired as labourers. In 1850 it was reported that 120-130 tons of coal were being raised a week from shafts sunk near the shore. Soon after, the mine was sub-let to Crockett who carried on operations for several years.

Bernacchi and partners tried unsuccessfully to revive mining operations in the 1880s. The old tramway was extended at this time. Today, a cutting which runs westwards from Crocketts Bay marks the line it once took.

Coal mining has, over the years, also been carried out north of Freycinet at the Denison and Douglas Rivers, Llandaff and Mt Paul. In 1923 construction began on a railway to carry coal from Seymour to a proposed new jetty and loading facilities at Coles Bay. Although never completed, the bed of the line became the basis of the Coles Bay Road.

Tin was first discovered on the Freycinet Peninsula in the 1870s. A number of parties worked the alluvial (surface) deposits during the late nineteenth and early twentieth centuries, with limited success. Work was centred on Saltwater Creek (north of Coles Bay) and Middleton Creek (near Bluestone Bay). It is thought that Chinese tin miners were amongst those who worked on the peninsula and Schouten Island during the 1880s.

In 1906 tin leases were also taken out in the area between Sleepy Bay and Richardson’s Beach, but the operations were short-lived.

A red granite quarry has operated intermittently at Parsons Cove since 1934. The stone has been used in buildings and monuments. Some of the stone can be seen in the walls of the Commonwealth Bank Head Office, Hobart.

Coles Bay and the Freycinet Peninsula have been popular holiday spots for over 100 years. Harry Parsons retired to Coles Bay in the 1920s and promoted the tourist potential of the area. He established shacks at ‘The Fisheries’ which were the forerunners of today’s holiday homes in the area.

The Chateau holiday units (now Freycinet Lodge) were established in 1934 by Ron Richardson, who leased the site from the Government. The complex was re-built after a fire in the 1950s. In recent years further development work has been undertaken by the new owners. 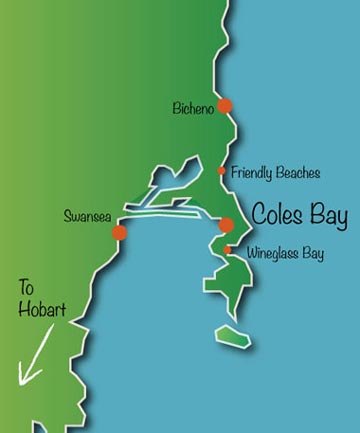